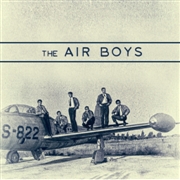 he Air Boys started in 1965, at the 115th Air Force Battle Wing (Souda) and they became the first modern beat group of Crete (Greece). In 1967 they recorded their extremely rare 7″ single with the tracks ‚I Feel Alone’/’Hathikes (You Get Lost)‘ and in 1970 the group disbanded. After that, the song ‚I Feel Alone‘, as a real garage dynamite, was included on the compilation ‚Greek Beats Great‘ (Gyro Recordings, Australia, 2007) In 2015 four of the Air Boys‘ founding members met again and they decided to do a reunion in order to record their 7 previously unrecorded tracks from the 1966-1969 era. The A-side includes all the 6 recordings from the 1966-1969 era plus 1 instrumental track from 2016. The B-side includes 5 tracks which were all written between 1966-1969 and were recorded for first time ever at the band’s reunion in 2016. Comes with a 6 page booklet with photos and bio in Greek and English language. Limited to 80 hand-numbered copies in leather box-sets. The box includes the gold vinyl version plus a CD version with 5 extra tracks, an original Kodacolor Air Boys videoclip from 1966, and an illustrated A4 80-pages photo album featuring the total Air Boys‘ photo archives and some unique memo diaries of the group’s founder Yiannis Gkikakis.