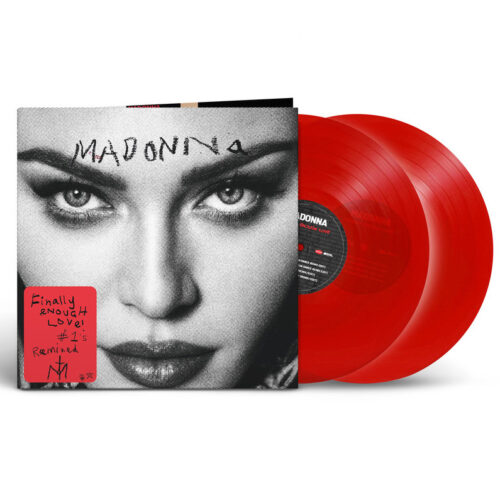 Red vinyl edition, in Germany, Austria and Switzerland exclusive to HHV customers.Madonna is the first and only recording artist to have 50 #1 hits on any single Billboard chart. To celebrate this historic milestone, Madonna curated a new 50-track collection titled Finally Enough Love: 50 Number Ones which includes her favourite remixes of those chart-topping dance hits that have filled clubs worldwide for four decades as well as an abridged 16-track version, titled Finally Enough Love. This 140-gram 2LP gatefold jacket includes single covers and a track-by-track on all featured 16 number one singles.

This collection highlights You Can Dance, Madonna’s first ever remix collection. Celebrating 35 years this year, You Can Dance has sold more than five million copies worldwide and is still the second best-selling remix album of all time. The collection also pays homage to “Everybody,” Madonna’s first single. Each remix was newly remastered for the collection by Mike Dean, who produced Madonna’s two most-recent studio albums, Rebel Heart (2015) and Madame X (2019). Along with those rarities, this album also introduces the “Offer Nissim Promo Mix” of “Living For Love” as its first official release.